Happy Sunday! Today I have a mani that I wore for all of 5 hours before cringing one too many times and literally scraping it off my nails. (Terrible, I know.) The second 2012 Challenge mani I have for you is a french tip mani. I don't usually like the traditional french tip so I made it my own and used pink and black. 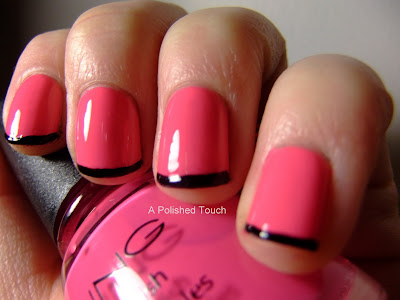 I will admit, I hate the nail sticker and rhinestones. I thought it would jazz things up but I ended up hating the result. I was literally running out the door after taking the last photo and didn't have the option of taking it off. Anyway, by the time I was heading back home half the mani was destroyed by yours truly. I picked the stones and stickers off and was scraping the black tips off. I used the Two-Way Nail Art Polishes and let me just say it: they are terrible. They dry horribly and it's possible to scrape the polish off even 3 hours after applied, even with a nice coat of SV on top. I'm disgusted.
Onto the good parts of this mani. Icing Secret Stash is the most perfect pink polish. It is so vivid - it's what I think of when I think quintessential pink. The second good part was the I free-handed the black tips and I feel like I did a relatively good job, considering how goopy and messy this nail striping polish is. I wanted a really thin black line but because of the terrible consistency of the polish I had to make it slightly wider than I had wanted. Oh well, for 5 hours of wear, I can deal.
[EDIT: I would classify this polish as a jelly crème consistency. Thanks to StephanieLouise who asked me that in the comments - I forgot to mention it! I consider the jelly crème to be another good thing about this mani - it's a great finish!]
Black tip french mani - they're still on my "cool" list. Are they on yours?
Posted by A Polished Touch at 1:28 PM