As much as I absolutely adore wearing neutral shades in my wardrobe and as much as I love collecting neutral polishes, I somehow find myself drawn towards brighter shades when polishing my nails. I think I'll have to start swatching my more "work appropriate" polishes, they are feeling neglected I think.
My Blue Monday mani is a tribute to my love of crème blue polishes (which I later cover in glitter, haha) and my affinity for doing accent nails. I used L.A. Girl - Disco Brites in Deejay for all nails except for my accent nails which I polished using a California Colors polish found at Winners. They came in a set of 5 and they were un-named so I creatively called it "Baby Blue". My creative polish names are quite impressive, no? 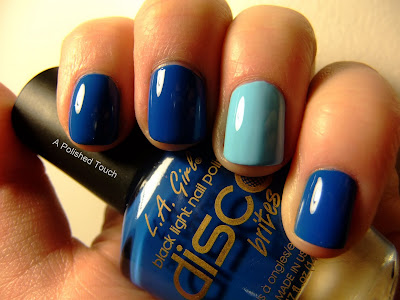 After polishing I kept looking at my nails, enjoying the two shades of blue but wanting something more. I looked in my Blue Melmer drawer and picked out two corresponding glitter polishes, both by ACO (the polishes by Ardene's) named Blizzard and Blue Glitter. Blizzard is on top of Deejay and Blue Glitter is over Baby Blue.

Blizzard is on my index, middle and pinky - Blue Glitter is on my accent nail.
One coat on each. 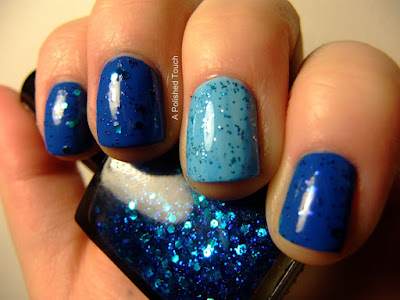 Blizzard reminds me of the type of glitter found in Deborah Lippman's "Across The Universe". I know it's not an exact dupe of the glitter, it is just reminiscent of it, in my opinion. Also, Blue Glitter was a let-down. As I applied the glitter I noticed that the colour from the glitter pieces seemed to bleed as I swiped the brush across my nail. Highly frustrating. I will try it out again over a white polish to see if it does the same thing. I've never had that happen before, I was slightly shocked.
I should mention as well that I didn't apply a top coat over the glitter polish and probably should have. I hated the texture the glitter gave my nails. It was rather odd. It felt like a combination of chunky glitter and plastic, as if the clear base dried plastic-esque. Strange.
Anyway, although it sounds like I hated this mani, I really didn't. I quite enjoyed it for the 24 hours that it lasted. ;)
Do you own any ACO or Ardene's polishes?
Posted by A Polished Touch at 11:36 AM